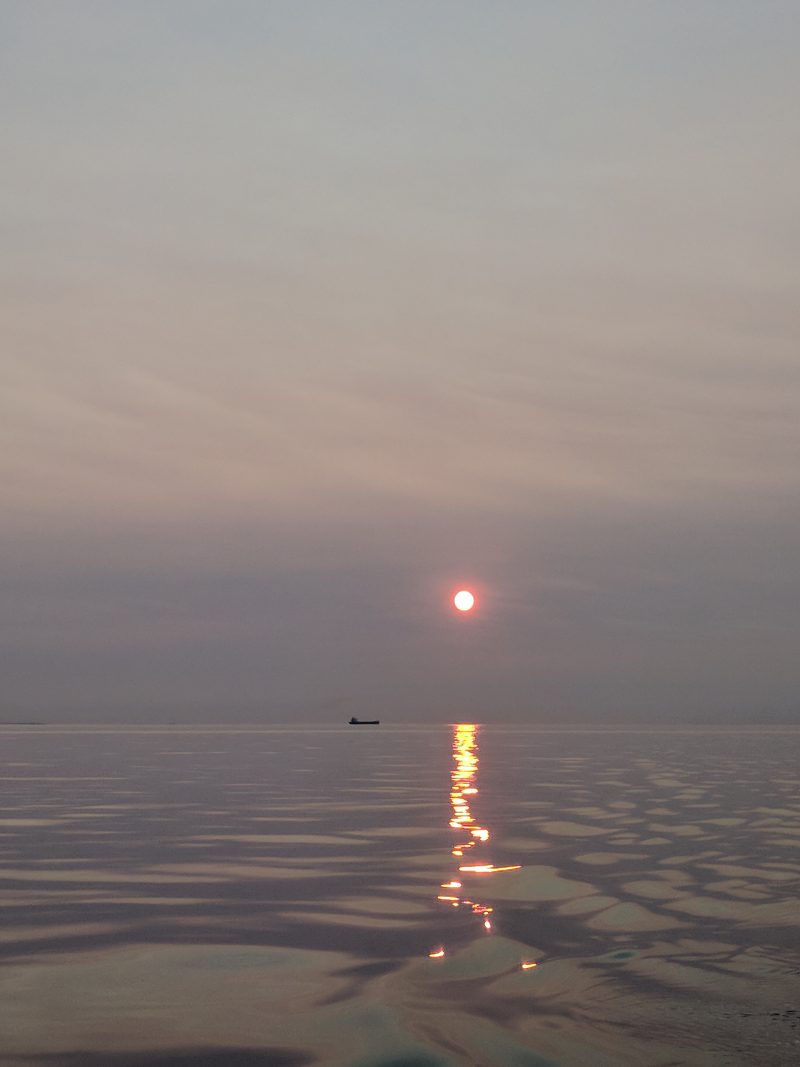 After leaving the Strait of Georgia through Dodd Narrows we spent a few days in the Canadian Gulf Islands and cleared US Customs in Roche Harbor at the northern end of the San Juan Islands. August is prime cruising season here and every anchorage is packed with boats. In Roche there was a 45min queue of boats bobbing around waiting to dock at the customs dock. Nevertheless we enjoyed the amenities and the good weather and built up a sleep surplus before going into the Strait of Juan de Fuca and out into the Pacific Ocean. We had arranged for a friend to join us in Port Angeles on Thursday evening for the 3 day trip to Astoria. Friday morning at 4am we pulled out of the Pt. Angeles Boat Haven marina for the trip west in the Strait to Neah Bay, a tiny town in the shadow of Cape Flattery, the westernmost point of the continental US. Leaving early we avoided the gale force winds that blow down the Strait every afternoon in summer. Neah Bay seems to have a bad reputation with pleasure boaters and most choose just to an anchor in the bay but we kind of like it and usually tie up to the dock and eat dinner ashore. The next morning we got up at 3am again to head out to sea and hopefully arrive at the Columbia River Bar at 10am the following day for a crossing with the incoming flood tide which reduces the sea state and makes the crossing less dangerous and in most cases even possible. Missing that window or an incoming storm would mean waiting out at sea for favorable conditions which sometimes can be for days. We rounded Cape Flattery with a Southeast wind and sailed southwest for a few hours to put a few miles of water between us and the rocky shore. When the wind died we motored south and sailed on and off. The sea was very confused, especially at night and our crew mate got pretty seasick but by 8am the following morning we spotted Cape Disappointment and the Columbia River Bar in the distance. The crossing went smooth and we are tied up in the Astoria West Basin. Stephanie came down to Astoria and we are off to Buoy Beer Brewery to celebrate. Only 2 days left on the river and we will be home.