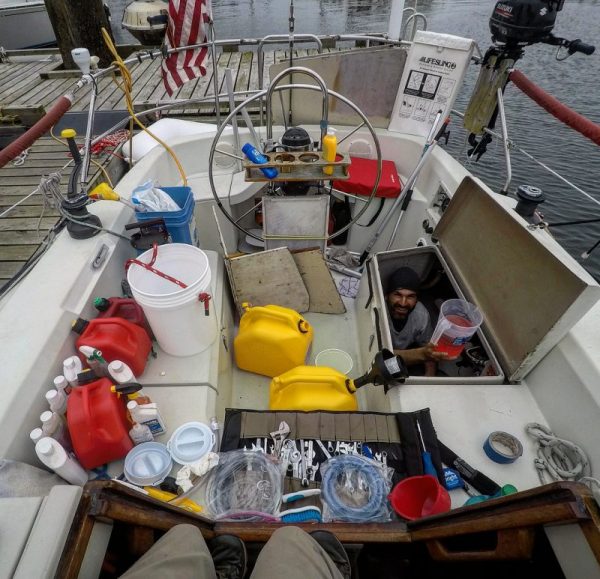 After leaving Kuhtze Inlet we headed up Fraser Reach to Hartley Bay. With light winds we ended up motoring most of it. Hartley Bay is a Native village. They offer water and fuel but otherwise don’t care too much about pleasure boater like us. We refilled water tanks and got some Diesel. We motored around the corner to anchor on Otter Shoal. It was a breezy anchorage with the wind blowing from the Southeast but with enough scope out it was pretty secure. After dinner we noticed a pretty strong diesel smell and after opening the engine compartment discovered a fairly big puddle of diesel fuel under the motor. It seemed to be coming all the way back from underneath the fuel tank itself but we could not locate the exact spot but we were sure it did not come from any of the connections so it had to be the tank itself. After some deliberation we decided that our only option was to make a run for Prince Rupert, the next bigger port, before all the Diesel had leaked out. The tide was going to be against us in the evening but would turn at 3am so we got the boat ready set the alarm clock to 1:45am and went to ‘sleep’. At 2am we weighed anchor and entered Grenville channel at first light. The current pushed us along nicely and the narrow channel with steep mountains on both sides was eerily calm in the morning twilight. We did not see another boat until sunrise. By 1pm we had left Grenville and were approaching Prince Rupert with the grain elevator and deep water port coming into view. It took another 2 hours to get there. We called Cow Bay Marina on VHF 66A to request moorage slip assignment. Cow Bay is a new addition to Prince Rupert’s otherwise tight moorage offerings and provides showers and laundry facilities. To our surprise it also offers a variety of restaurants, coffee shops and machine shops that cater to the fishing fleets. We were pretty much wiped out, got dinner at the fish market and went to bed. The tanks had stopped leaking, most likely because the Diesel level had fallen below the leak point. The next day we started by getting breakfast at Cowpuccino Cafe and then beginning the task of removing the fuel tank. By early afternoon we had removed all connections and drained the remaining fuel into jerry cans. The tank did come out through the cockpit locker without major problems.

The amazing thing up here is that all boaters on the dock are friends, people from other boats walk up to us and start conversations and talk about their experiences and pass on recommendations. Everybody has already met somewhere along the way. And they all have unique stories. Our dock neighbor from Michigan is sailing his sons boat from Olympia to Sitka, illustrates for Good’Ol Boat on the side  and is waiting for his friend to meet him up here in Prince Rupert. There is the guy across the row who has a popular YouTube channel and now lives in Prince Rupert and helps us connect to the right people to get our tank problem figured out. There is a former San Juan Sailing instructor from Austin, Texas who had his boat from Lake Travis trucked up here.
We end up talking to the guy in the marine store down the road to see if he can order a polypropylene tank as a replacement for our aluminum tank. But the size we need is a special order and has a lead time of a few weeks. We mention that we were considering going to one of the aluminum welding shops around the corner to ask them to make us one and he is like, ‘follow me guys, I know just the guy’. He leads us to the back of the store and down the stairs to a machine shop. Within 20 minutes we have the guy committed to weld a new tank for us by Monday afternoon. Now we get to spend the weekend in Prince Rupert. Will probably head up to the cannery in Port Edward tomorrow.